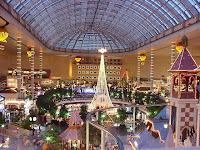 Let's see, my mum went home in late September. After she left I made her a photo book from snap fish. It contained a lot for photographs from all the exploring and sightseeing we done around . It took me HOURS AND HOURS to complete but it was worth it!

At the beginning of October, David and I went to in . It was amazing! As it was Halloween at the end of the month the entire theme park was decorated with Halloween themed decorations, American style. It was awesome! I thought it was much better than any of the themes parks in but David thinks is better.